Berge & Co has since the founding day of 20 September 1954 been a family-owned group, and with it follows a long history. In the subsequent 70 years, their dealerships have expanded from selling 3 cars in the first year to around 2000 contracts in 2021. On the ownership side, they started by owning a small shop on Hafstadvegen road in Førde to building several large facilities in Sogn og Fjordane.

It all started with the importer for Volkswagen, Harald A. Møller, considered starting a car dealership in Sogn og Fjordane.

The start of the car adventure

On 6 September 1954, Erling Berge (1922-2015) signed a contract with Møller AS to be a Volkswagen dealer in Sogn og Fjordane. Berge & Co AS was founded 14 days later. He had his brother, Knut Berge, and brother-in-law Arthur Øvrebø, on the team. He sold three cars the first year from the rented premises at Trygve Os on Hafstadvegen road in Førde.

Quadrupled the sales in four years

From the beginning in 1954 until October 1960, there were various restrictions on the sale of cars, and one had to have a purchase permit. Not many people had this. Still, it didn't stop Berge & Co from selling! They sold cars everywhere, and sales in Sunnfjord, Sogn and Nordfjord went very well.

The basis for the good operation was clearly the "VW Beetle", but the VW Pickup and vans also made significant contributions to good numbers. Berge & Co were good at acquiring contracts with major companies and craftsmen.

Car sales increased steadily in years to come, with a formidable peak in 1969 with a total of 630 cars sold. In 1972, Berge & Co was also dealing in Audis, also earning the right to dealerships in Sogn og Fjordane. The Volkswagen Golf came in 1974, which was to become a worthy competitor to the Beetle.

After a decline in 1970, car sales picked up throughout the 1970s. In 1977, Berge also reached a major milestone – 1008 cars sold in one year! The end of the 80s and the bustle of the 90s followed a banking crisis that saw people drowning in debt, high levels of unemployment and a new decline in car sales. In 1999, Berge & Co won the right to sell Skodas in Sogn og Fjordane – once optimism returned to the car industry.

Berge & Co has over the years grown larger and acquired several more locations in Sogn og Fjordane, in addition to the car dealership in Førde. Berge's dealers had previously spread throughout the county and had various workshops focusing on repairs and maintenance of the cars they sold.

It was time to invest in our own facilities outside the municipality of Førde. First up was setting up in Sogndal. Erling Berge had been in contact with Hagelin about purchasing some land. People in Sogndal thought it was ill-advised for Berge & Co to buy land there, but Erling did not give up. He bought some land and that same year Bergehallen was opened (1972), and the plant was ready in Sogndal

Berge & Co currently has six dealerships in Førde, Florø, Sogndal, Stryn, Måløy and Ørsta, and is a dealer for new cars from Volkswagen, Audi and Skoda – in addition to selling used vehicles.

In 1991, Erling Berge gave up his shares in the company to the second generation of the Berge family. His son, Øyvind Berge, took over as daily manager of the Group. He had his siblings join him in the ownership. In 2000, Øyvind was also appointed manager of Berge & Co AS. The second generation has been operating the company with good margins and turnover for many years, with total renovation of the new car departments and close to 130 employees at the company. Turnover figures for 2021 amounted to 651 million kroner.

Frydenbø acquired Berge & Co in 2022, thereby expanding both its geographical scope and brand portfolio. Berge & Co's history is great and important – Frydenbø respectfully brings this with us in company operations now and into the future.

Amalie Blomgren from Morvik in Bergen has recently passed the trade examination and is finally a certified mechanic. After two years as an apprentice at Frydenbø Bilsenter in Åsane, she is looking forward to taking a step further into the role of newly certified mechanic! 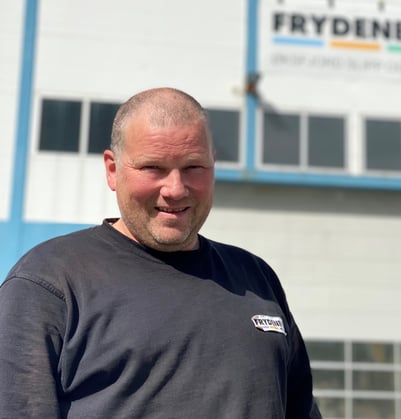 No days look the same!

Karoline Westlie works in Frydenbø Boats, and is responsible for the logistics of Nordkapp, Sting and Zodiac. In her free time, she likes to go boating, and to enjoy the ocean.